“That’s not a water tower,” you say. You’re right. On the north side of Highlands Park in Kirkland, Washington are five curious monuments on top of a hill. They are the footings of an old metal water tower that had been removed by the mid-1980s.

X marks the spot where the legs used to stand. There are four such blocks, each of which has weathered differently. You can see where large metal bolts were sheared off on either side of the X.

The center block lacks the distinctive markings but has a different shape.

This is what the tower used to look like, courtesy of the Seattle Times, who was recently asked to find this photo by a local resident. Thank you to Kari Page at the City of Kirkland for sharing it. 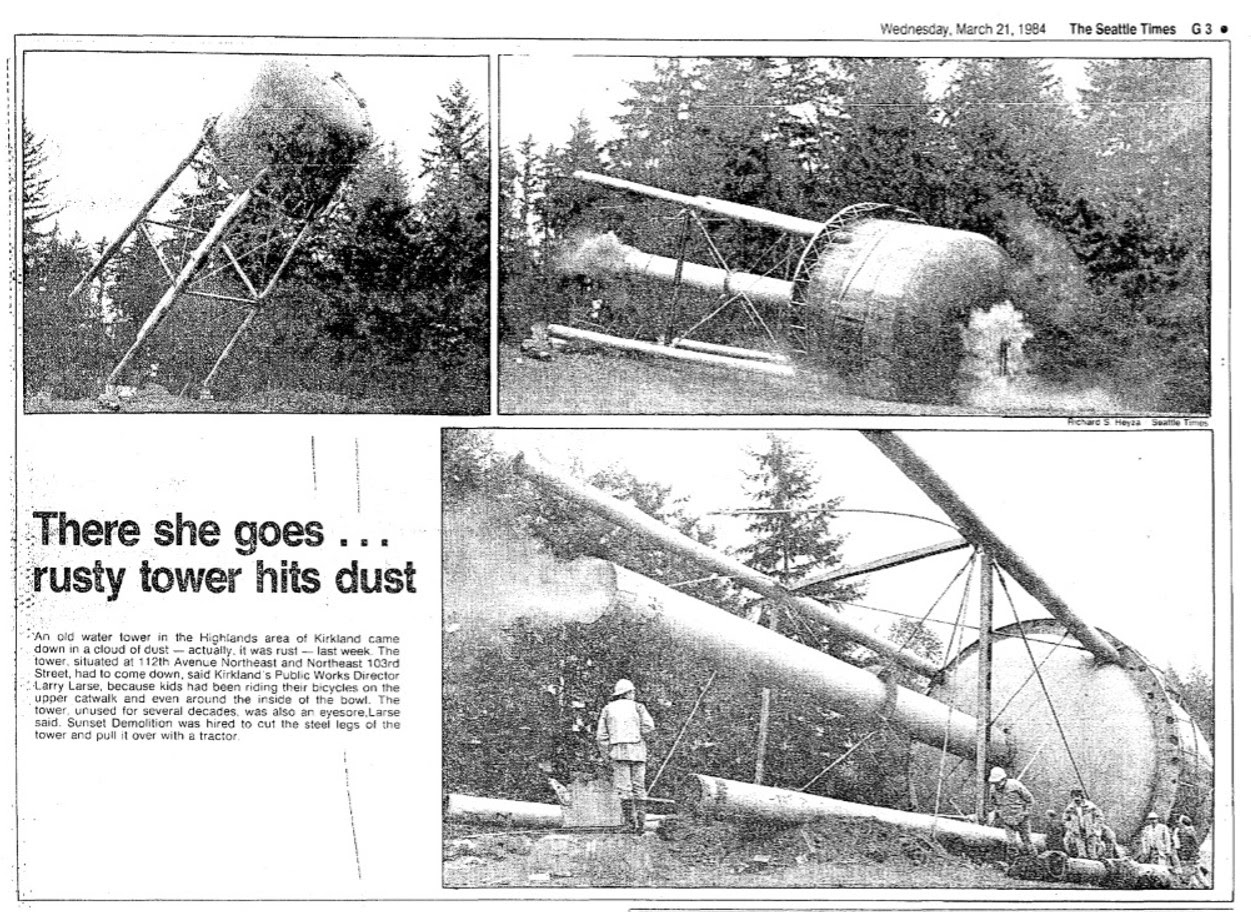 Further north, on the lush green hillside of Holmes Point, resides an old wooden tank on the south side of the northern leg of Holmes Point Drive. Confused? That’s okay. I’ve hesitated to mention this for years because of the damage people could do to it. Nature has already taken a heavy toll.

Last I knew, King County owns this property because someone stopped paying taxes on it and it didn’t sell at auction because… you can’t build on it. It was the headquarters of the Inglewood Park Water District.

The Inglewood Park Water District served 40 homes in the Holmes Point area for a while and was operational in 1972 according to a local resident I spoke with who bought her home nearby. She was the secretary-treasurer for the association and still has many of its records.

This wonderful lady said the water came down the hill from the St. Edward Seminary to that lot—the seminary is the centerpiece of the St. Edward State Park. The shed is a pump house and the taller structure was the water tank.

The Inglewood Park Water District paid a neighbor’s two teenage sons to put chlorine in the tank every month and called it “blessed water” because it came from the seminary.

In time people started hooking up to “city” water (presumably the Northshore Utility District’s, which provides water in that area today), so their water district disbanded. Evidently there was $6000 in Inglewood Park’s account at that time and it went to someone’s mother’s estate.

Now time is eating away at these delightful old structures as they are gradually absorbed into the surrounding environment. The most excitement they see nowadays is the daredevil skateboarders who cruise down Holmes Point Drive at breakneck speeds.

One went by as I was taking these photos and did some sort of disco/flag semaphore signal move as if to say, “look at me!” I expected him to veer off the road and take out a tree, but his curiously contrasting skinny body and oversized helmet whizzed off around the corner like a space alien rushing to get to their battlestation.

For many of us, clean water is so plentiful and readily available that we rarely, if ever, pause to consider what life would be like without it. -Marcus Samuelsson